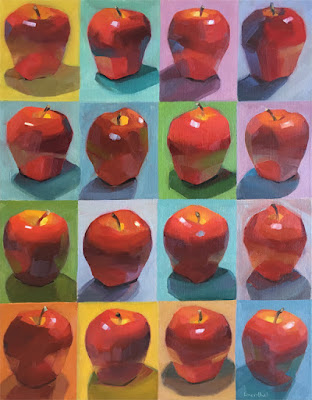 Wishing everyone a Happy, Healthy and Peaceful New Year.
My plan for the new year is to teach.
To view my profile and teaching agenda, click on the link in red
Thumbtack 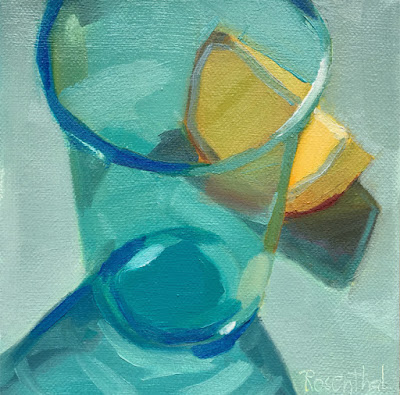 This little still life was fun and quick. I love the blues and a bit of lemon yellow. 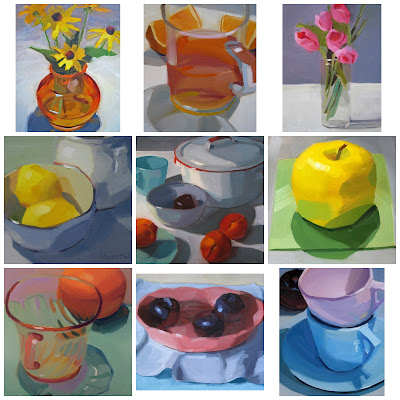 These are some of my most viewed images from 2016.
Thanks to everyone for a great year.

Email ThisBlogThis!Share to TwitterShare to FacebookShare to Pinterest
Labels: A collage of paintings from 2016 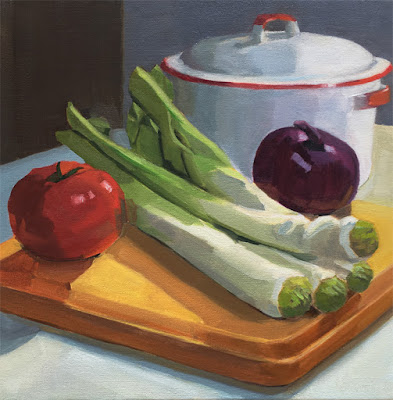 It's taken me awhile to complete this painting. I worked on the colors of the wooden cutting board and the bottom of the leeks. It's done and I'm pleased. 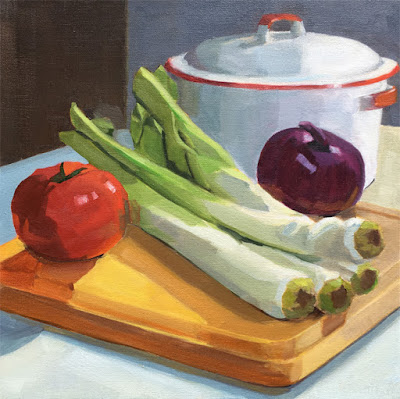 My concern was how to make the bottom of the leeks interesting. I wanted the viewer's eye to roam the painting without getting stuck at the textured ends of them. Vegetables have such beautiful color and interesting shapes, I don't know why they get the short straw in painting genres.
Posted by Robin Rosenthal at 1:56 PM 2 comments:

How I Develop a Painting

I spent the evening thinking about what I'd like to paint.
The idea came to me in object and color combinations. I was inspired by paintings I've seen in the past in magazines, in museums and those of my favorite contemporary painters. I wanted the challenge of painting several objects on a larger
20 x 16 horizontal canvas and not my usual 10 x 8.
It took a while, I had to buy the produce and gesso a canvas.
I put things in and took them out and did a lot of rearranging.
It actually took a lot of time. 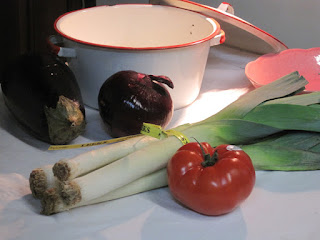 This was my original layout. It ended up with too many items.
It was too busy and awkward. 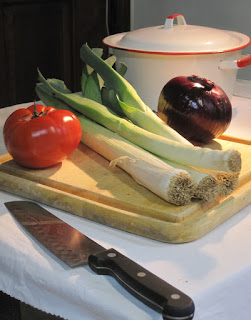 I liked this layout with the canvas vertical, but in the end, I didn't like the knife in for foreground. It was too heavy and it reminded me of a slasher movie. Although I liked the way it led the viewer into the painting. 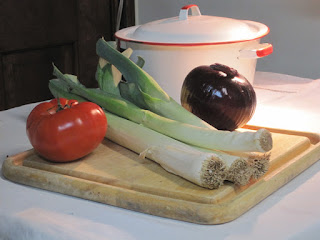 I took the knife out. I squared up the image in photoshop to fit a 12 x 12 canvas and the perspective worked. I liked the foreshortening of the leeks. I could see this still life as a finished painting. 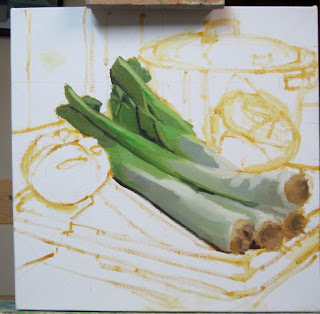 I drew it in and started with the hardest object to paint and those were the leeks. I paint from life with smaller paintings and also use a photo reference for larger work.
The next session I might have to touch up what I've already painted and then go from one object to the next in the painting process.

Robin Rosenthal
My name is Robin Rosenthal and I am an oil painter. I started painting in 2003 and then began painting almost every day in the fall of 2010. I've created this blog to share my work. It is my belief that if you paint every day (or almost) you will get better. Hope you enjoy my blog. Thanks for visiting. Email: robin.rosenthal12@gmail.com

How I Frame my Paintings 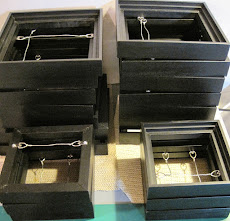